Although ‘neoliberalism’ primarily invokes associations with Margaret Thatcher, Ronald Reagan, the financial crisis and the demise of social security, neoliberal thought predates the actual establishment of the welfare state. 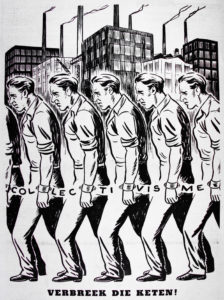 The research project ‘Founding Freedom’ focuses on the development of neoliberal thought in Western European, most notably in the Netherlands. In the aftermath of the Second World War, Dutch neoliberals fiercely opposed the emerging welfare state. They argued that any government aiming to nourish its citizens from cradle to grave would require a dangerously large amount of socio-economic (and hence) political power. Despite the good intentions of its advocates, the welfare state was therefore bound to re-establish the recently defeated totalitarian state. To secure freedom, neoliberals put their faith in the market. Through the mechanism of free competition, the market would thwart the attempts of any party to exercise excessive influence over others, thus providing individual freedom for all. Rather than delimiting the free market or allowing it to run its course, the state should reinforce the market by fostering the principle of free competition.

‘Founding Freedom’ examines the birth of neoliberal thought in the Netherlands, its dissemination and its influence on socio-economic policy. In doing so, it does not assume a coherent neoliberal ideology, but rather investigates how clashing, but resonating ideas contributed to the development of a neoliberal ‘thought collective’. The research project maps the international development of neoliberal thought, as well as its dissemination within the Dutch political arena, with a particular focus on socio-economic policy within the areas of social aid, social housing and the organization of the labor market.

By embedding the history of the early neoliberal movement in the context of the emerging welfare state, ‘Founding Freedom’ examines the impact of ideas on politics and policy, moving beyond the conventional realms of the political party.