At first sight, the Dutch 1980s present the observer with something of a paradox. The 1980s are commonly known in the Netherlands as a decade of depoliticization and dissipating ideological claims. A period of technocratic “no-nonsense” politics. At the same time, the government coalitions led by the Christian Democrat Ruud Lubbers presided over a sharp transformation of socio-economic policies inspired on neoliberal ideas. In a short period of time, the Netherlands made a shift from a Keynesian demand-side policy to what was called a “moderate supply-side policy”. Frans Rutten, the Secretary General of the Ministry of Economic Affairs, explicitly defended these reforms by reference to a long-term societal vision based on the work of Milton Friedman. Wil Albeda, Minister of Social Affairs from 1977 to 1981, referred to the group around Rutten as “drawing on the neoliberal arsenal as it has been thought out in the U.S.”

The paradox of a sharp ideological shift, presented publicly in a depoliticized manner as no-nonsense politics, constitutes an intriguing deviation from existing theories of institutional change. According to Peter Hall, large shifts in ‘policy paradigms’ tend to be accompanied by politicization and a public contest over ideas. In his study of the changes under Thatcher, Hall noted a significant shift of power from existing policy elites to actors outside state institutions. 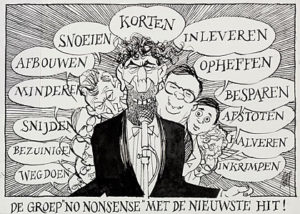 The very opposite seems to have happened in the Netherlands: the paradigm shift took place in a context of depoliticization, with a leading role for policy elites. A closer look reveals that there was a sustained battle of ideas between Keynesians and Friedmanites within the different ministries. Could it be that the paradigm shift in the Netherlands was realized through a contest of ideas outside of the public view? How did Anglo-American inspirations relate to the homegrown tradition of Dutch neoliberalism?